Has a book been written about your local area or about the place where you grew up? If so, you’re lucky, and more than a nod of thanks is due to the person/people who spent many hours researching and compiling the information.

In my case the thanks goes to Marie Cleary and her team in Tinahely, County Wicklow who published Tinahely Times Past: Recollections and Reminiscences last year.

It’s a pleasure to have a hardcover, signed copy to keep on my ‘treasure’ bookshelf (that’s the one that I won’t lend books from for love nor money).

It covers all aspects of the town’s history from how the town has changed to what was said about it by historians, to lists of traders and families who lived there over the years, to information about landmarks, townlands, songs and stories. It is a comprehensive publication.

As happens when you read a book like that (which I did during a lockdown) and you happen to like to write, certain stories stick in the mind or strike a chord, summoning up an image in one’s head that settles in and demands pen attention.

The image that stuck in my head and that led to the poem below involved Fossetts Circus. The poem was triggered by a mention, on page 370, of how the circus wintered on a farm in Ballinglen, near Tinahely, between 1937 and 1952.  The circus wagons trooping back to Ballybeg each year after the season was over must have been quite a sight, particularly in those television-less days. Strange animals in Wicklow fields – how odd that must have seemed to the locals, too, and a contribution to the book by the late Cam Boyd proved that it was. He relates a tale told by a neighbour named Jim Hogan about a monkey on the loose copying him ploughing.  I couldn’t get the image of this ‘ploughing monkey’ out of my head. I’m not sure what kind of monkey it was in reality but in my head I see a chimpanzee.

I feel his shock

That ploughman in a Wicklow field

As he guided horse and plough

Put up a middle in the frosty soil

A glance into the next field

Stopping him in his tracks

A chimpanzee there in copy mode

Held out in front

As if holding shafts

It made him smile –

Working in those fields

Beside those owned by Fossett’s

Where fear could gather too

For who knew what could happen

When the circus wintered

But yes I think I can see Jim smile

Of the grinning chimp

In that grassy place

So far from tropical forest

Then stopping and doing something

That his fellow ploughman couldn’t do –

Going down on all fours 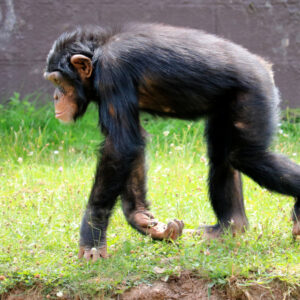