Last Friday night, December 7th, was a big night for me – and possibly for someone who died 45 years ago – my grand-aunt Ess, short for Esther.

She was remembered in style, at least, when a radio essay that tells her story was included in the collection of 50 audio clips chosen to represent 50 years of the RTE Radio 1’s music and musings programme, Sunday Miscellany.

The special radio festival, programme-recording and Listening Lounge event was held in the Project Arts Centre in Temple Bar from December 7-9 where the public could attend a recording of one of five special Sunday Miscellany50 programmes or simply drop in to see scripts, letters and memorabilia from the programme’s past half-century and sit on benches to listen to the recorded voices of the 50 selected writers, some like Maeve Binchy, Seamus Heaney and Nuala O’Faolain now deceased, reading their 3-minute scripts. The topics varied from St Patrick’s Day in Abu Dhabi to schooldays to the forty foot to a baby buffalo in London to inland waterways and hurler’s seats.

It was a huge delight to have Aunt Ess’s story included in that list because her story represented those of many Irish single women, I believe, who spent their time on the circumference of relatives’ lives, working hard as carers in a home that was never theirs, perhaps never having a job in the big wide world and who never had their own fireside, so to speak.

The essay was first broadcast in August 2009 and while the audio clip is no longer available online the text is below if you’d like to read it.

It was also published in the Sunday Miscellany 2008-2011 Anthology. 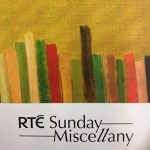 She didn’t look like a woman who needed a corset.

Stick thin and almost ninety she wrapped the salmon coloured foundation garment round her body, fastening the hooks and eyes with great difficulty because of her arthritic hands.

Was it more out of habit than need that she wore it at that stage, the steel stays providing some kind of definition and restriction that she was comfortable with?

Whatever the reason, she wore it into old age.

Dressing was quite a ritual – interlock underwear then corset and slip and one by one, the thick lisle stockings held up with bands of elastic, then the pink blouse and the gun-barrel grey skirt with the concertina pleats that was hitched high under her chest.

Next the navy cardigan and then it was the turn of her hair – long and fine and white and twisted into some kind of bun with what looked like a pipe cleaner then a black velvet hair band added as a final touch.

With shoes and glasses on and stick in hand she was finally ready, at around eleven a.m., to make the six yard trek to the kitchen in search of liveliness and heat.

We called her Aunt Ess, that’s E double ‘s’, never Essie as visitors did and definitely not Esther, the name she was baptized in Kilpipe church in 1881. Somehow names didn’t stay stretched out in those days of land wars and civil war and world wars on the double.

She was a grand-aunt, of course, but life was also too short for that kind of appendage.

Aunt Ess was seventy-nine when I was born and I was thirteen when she died on the 10th of April, 1973 and it was early morning and the cows were being milked and I had to do a maths test and I didn’t care what answer ‘pie r squared’ gave me that day.

She was the sister who stayed at home.  The 1911 census shows her living in the house in Loggan, near Gorey, County Wexford, aged 29, with her father then aged 80 and her younger brother Thomas, my grandfather, who was then 20.

One of thirteen children, she’d been the one to mind him after their mother died when he was only nine.

The second youngest girl, I wonder exactly why she was the one who remained behind to keep the brown bread made.

Why didn’t she fly the coop and make a home for herself in somewhere like New Zealand or Canada or Dublin like her sisters did?

Did she make that decision because she was a natural born homemaker or were fear of change and a sense of duty the psychological stays that kept her within the radius of home and gave her life the definition that she needed?

In later years, she went to live with my grandparents where she helped out in the house and saw their children and some of their grandchildren grow.

My childhood memories of Aunt Ess are mostly of a silent, background presence.

In her old age and deafness she didn’t move or talk a lot but mostly sat on the bench beside the fire, on frosty days jigging her leg up and down as if to shake the pain out of it or, on better days, dandling the baby in the house on her good knee and singing in her now creaky voice:

Jobby, jobby, little horse, how many miles to Dublin?

Three score and ten, sir, to bring me back again, sir.

Thirty years she’d been crippled with arthritis and I can see her hands still, knuckles knobbled by the joint damage and the skin mottled with age.

Thinking of her, and all the other elderly aunts who lived in our locality, I don’t think their lives could have been that easy – single sisters living on the circumference of relatives’ lives, women who probably knew no regular income until they got the pension but who, in their day, were major picker uppers of domestic slack in homes around the country.

Rumour has it that Aunt Ess’s tongue wasn’t always quiet but even if it was sharp on occasion was that sharpness born of disappointment at the straw she’d drawn in life, not to mention the frustration of immobility and pain from an early age?

I wonder, too, if she ever dreamed of marrying and rocking her own children to sleep.

There are no stories of romance for Aunt Ess that I know of but she was young once and human and could have harboured such desires.

There aren’t that many photographs of her but in those we have she often looks a bit sad or downcast or slightly startled in the light of the lens.

There’s one photograph that’s different, though. She is in her 40s and wearing a check-patterned apron over a dress and standing in front of the whitewashed house in the Milland.

It’s a warm working day and wisps of hair have escaped from her bun and she is smiling broadly, her eyes crinkled up and her teeth joyfully on show.

I don’t know who made her laugh that day or who took the photograph but I’m glad that someone did for, in that one photograph, my aunt Ess’s face is a face transformed.