It was a good value break – super even, and an opportunity to hit the road in search of the brain balm that getting out of one’s bubble can bring.

R&R – rest and relaxation, refreshment and recovery, with a shot of pilgrimage thrown in.

Kerry had been the first place we’d gone on holidays together and 36 years on, the pull to go there again was strong.

While sleep was had in Killarney the urge next day was to escape the hub for the landscape that made the town a magnet in the first place. It was Wicklow, my home county, all stretched up. Yep, so much land that it had to be shoved up in heaps.

We hugged the ditches on the narrow roads of the Ring, winding up into the Magillacuddy Reeks where even goats didn’t graze – imposing, rugged, the road snaking up and upto Ladies View and Moll’s Gap where an Avoca shop with a bird’s eye view had taken root. 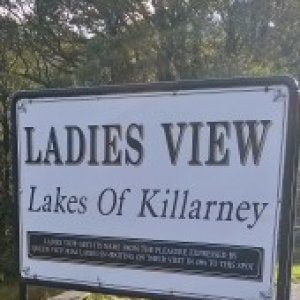 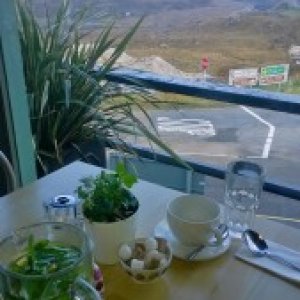 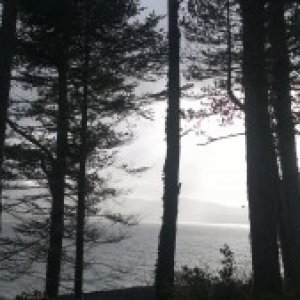 Next stop was Kenmare, a heritage town and a graceful place to stay whenever we come back. As the day progressed the weather swivelled on clouds, like mood turning on  a sentence, and the camera soaked it up – from cotton-wool skies to tall trees, monochromed by rain.

From Kenmare we took the road less travelled, we thought, to Sneem, the ‘knot’ in the middle of the Ring where there was a cat called Kevin in Kelly’s teashop and busloads of tourists sporting big lenses and short vowels.

Then it was back to Moll’s Gap where a rainbow could be seen on that day of extraordinary light. Pulling in to stare we saw that a couple had gone down the ravine to better capture the image and they were captured forever in ours.  Shades of Turner and Constable…  A favourite photo. 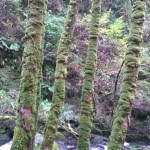 Torc Waterfall was next where there were more thoughts of rings where the lichen-covered trees  belonged to Middle Earth.

Then on to Jarvey’s Rest for heat and food and to contemplate the other ring, the one that a pause at Ladies’ View had put back on, re-fitted, polished, the one first put on on December 15th 1979 but clipped off in ‘96 to play a Magdalen woman. 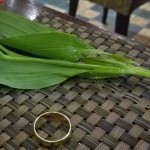 And there was another couple there beyond us at the View that day, twenty-somethings in the flush of love, taking selfies with phones that hadn’t been invented in 1979 and it was
like us, then, two generations of ourselves now back at the spot.  And there was gratitude for survival, heading for 40 winters on. 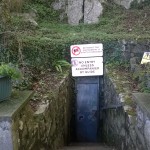 On the way home next day the draw was to Mitchelstown Cave to explore new depths, to descend to the bowels of the earth,down and down, to see what had never been seen before, jaws dropping and eyes saucering at the spectacle of it all and fingers reaching out to touch the stone cold novelty of column and ‘curtain’, dripped into permanence by time. I stood down there thinking of catacombs and in the 100% darkness never experienced before, in total awe at the world that lies beneath us that we tread above unawares. My mind was with the finder in 1833 whose pick loss had led to the discovery of this under-world, imagining his gasp at the sight of stalactites and stalagmites and the joined up thinking of the pillars.

A SECOND RAINBOW
Coming up for light, up 60 man-made steps to green field familiarity, a rainbow shone in the sky. Another one.

Two days in a row we’d seen them and this one lingered briefly, weaker than the day before perhaps, but still there, triggering an urge to capture it and cling.

Then in the heat of the car, as ignition turned, my ear stood to attention at a tune’s opening bars. Guitar, harmonica – that gutsy combination. Jack Johnson, I’ve learned since. Rainbow on the radio. And the words flowed in.

Well, I woke up this morning, And a rainbow filled the sky…