‘Pinch me’ Moments in Madeira

It has been a heavy time, news wise, lately but sometimes you have to focus on the good memories.

Yes, there was a lot to fill our television screens lately – and make jaws drop and hearts stop on sofas.

I’ve never been to Notre Dame but the thought of a cathedral as ancient as that going up in flames was saddening but the fact that no one died was some kind of relief.

The death in Derry was much worse and continues to be a concern – time for big prayers for wise and steady leadership in and for this country.

The recent bus crash in Madeira was horrifying also – 29 German visitors to the island losing their lives. Maybe it has stuck in my mind because I once had the privilege of visiting Madeira and I remember the roads and the bends and the steepness. Given the steep terrain it is a tribute to the drivers there that very few accidents have happened over the years.

Madeira, an island owned by Portugal is visited by around one million tourists each year and when you are there it is a case of constantly looking either uphill or downhill for there are very few level areas on it. Driving there demands a real head for heights and a steady hand. Drivers often are more like thrill seekers than chaffeurs given the kind of terrain they have to negotiate! That’s not to take away from the joy of visiting this special place, however.  I got the opportunity of going there, at two days’ notice, in 2011. Another journalist couldn’t make it at the last minute so I got the call at noon on a Friday and by 9.30 a.m. on the Sunday I was in the departures lounge in Dublin Airport heading for Madeira’s capital, Funchal, for five days, courtesy of Concorde Travel.  What a joy that was. This is what I wrote about Madeira when I came back: 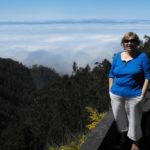 A HOLIDAY FULL OF PINCH ME MOMENTS

It was five days of firsts – my first time in Madeira, the Portugese-owned ‘pearl of the Atlantic’, my first time to experience volcanic landscape, to see banana trees and sugar cane growing and to see dolphins close up.  It was also my first experience of being so high up on land that I could actually look down on the clouds. Memorable moments also included eating octopus and, to top it off, toboganning down a 5km slope in a basket! 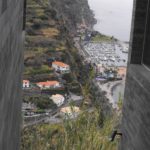 Madeira is an entirely different landscape to Ireland.

Formed by volcano you’d almost wonder how anyone settled there originally, building homes into the sides of mountains and farming among dwellings and on top of ditches but settle they did, proving 15th century man’s resilience and determination.

Madeira was the place where the wealthy of Europe wintered because of its sub-tropical climate and it was also a crucial trading port before the Suez Canal opened.  George Bernard Shaw spent time there as well as Winston Churchill who could be seen in 1950, cigar in hand as he painted, his hired Rolls Royce with its bar in the boot parked nearby. Now there is an EU-funded road network that makes everywhere much more accessible for local and tourist alike.

First impressions of Funchal, the capital, were of heat, steepness, cleanliness and terracotta roof tiles. As we drove there on Sunday evening we could see passion fruit ripening over walls, African tulip trees in full bloom and blue and white agapanthus flowers standing sentry at the hotel. 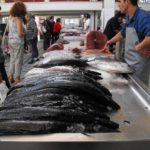 Evening saw us sampling the Madeiran culinary delights in a restaurant in the nearby fishing village of Camara de Lobos (the bay of seals).

Black scabbard fish are a traditional delicacy.  It’s a fish that lives deep below the surface and looks more than a bit fierce as it hangs over the benches in the fish market but its white, flaky flesh is tasty enough served with vinegar marinade.

We also tried another Madeiran speciality, espetada – flamed cubes of beef on a skewer along with fried maize (milho frito). Next port of call was a local bar to sample the Madeiran drink ‘poncha’.  It’s a sweet, heady mixture of rum, lemon juice and honey.  I don’t know what truth there is in the rumour that you’d be speaking fluent Portugese if you managed more than two…

DOLPHINS IN A SPARKLING SEA

Monday was dolphin day.  Because volcanic islands don’t have a continental shelf sea creatures come in close to the island so dolphin and whale watching is a big feature of a stay in Madeira.

We went out in a 10-seater Rota dos Cetaceos boat with a marine biologist to explain what we were seeing.

Although swimming with them wasn’t allowed that day as they were displaying mating behaviour, we were told, it was a real joy to see the spotted dolphins jump and dive alongside.

At €42 per adult for a morning trip (you get a free second trip if nothing is spotted) it was very good value.  The sea was unforgettable, sparkling as the sun rose in the sky. 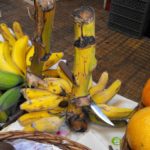 Back in town elderly women sold yellow camomile posies on street corners – something I hadn’t seen before either – but we were told that Madeirans believe in its healing qualities, drunk as tea or simply chewed.

The visit to the fruit and fish market was another feature, partly because of the education I got about bananas. Nine different types are grown on the island as well as seven different types of passion fruit!  The taste of a ‘pineapple banana’ has to be experienced to be believed but keep an eye on the slick- fruit sellers – you could be going home with a tonne of fruit before you know where you are. 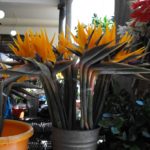 In the market flowers were everywhere also but the dramatic ‘bird of paradise’ was the real head turner for me.

After lunch of sardines bigger than any I’d seen before we left the old part of the city to take a cable car up to the Monte Palace Tropical Gardens overlooking Funchal Bay.

It is a gardener’s heaven.  Orchids, giant ferns, cycads, hydrangeas, azaleas and heather trees abound as well as 1000 specimens of laurel.

Laurel is huge in Madeira and its famous Laurissilva forests (which cover 20% of the island) are now a World Heritage Site.

If it took a while (and good calf muscles) to reach the top of the gardens it took a very, very short time to get back down to Funchal – in a basket.

Wicker basket tobogann-ing is particular to Madeira and was handy for getting goods and merchants from Monte down to the capital before the days of cable cars apparently. I gave it a try because I knew I’d be sorry if I didn’t.  At the same time my head was saying ‘where are the safety belts?’ Imagine being in a waltzer that is being pushed downhill by two men (carreiros) who steer and brake the basket using ropes on the front and special covers on their boots.  The slope is greased as well to make the baskets’ passage easier. It was an exhilarating experience. When I wasn’t laughing I was closing my eyes in case we hit the wall on one of the many bends but we arrived, a bit shook but triumphant, at the bottom.

Back at the hotel it was obvious from the clientele that many older UK residents love to holiday in Madeira.

One couple I spoke with had been there eighteen times, coming back again and again (usually to the same hotel) for the warm weather, the peace and safety of the island, they told me.  The crime rate is low in Madeira (it’s a small island so where are you going to go if you do steal a car?)

Tuesday saw us heading west by mini-bus to Porto Moniz on the north of the island.  Picture natural swimming pools formed by black solidified lava, rough to the touch.

The octopus we had for lunch in Sao Vicente was a bit on the chewy side for me but I’m glad I tried it.

Visiting Madeira without going to Blandy’s Wine Lodge in Funchal would be a mistake.  Once a 17th century monastery it is now an ageing store for thousands of litres of Madeiran wines.  We took the basic tour (€5 per adult) that afternoon.  Imagine the smell as you walk through a cut oak barrel that has aged wine for hundreds of years… Madeira is a fortified wine because grape brandy is added to it.  800 farmers supply grapes from the 400 hectares of vines on the island so individual farms are tiny.  All the work on the rich volcanic soil is done by hand because there is simply no space for machines.

Tourism is obviously hugely important for Madeira. With wages per month running at €495 – €800 the income is very important and small, old second hand cars are very much in evidence – often parked in rows on lower roads because residents can only access their high-up houses on foot.

HOLD ONTO YOUR HAT

Seeing the real Madeira was next, thanks to a mountain trip to the east of the island by jeep on Wednesday.  It was a case of holding onto your hat and the door handle as the 4 x 4 climbed higher and higher…

The levada walk at 1400 metres above sea level was dramatic too.  Levadas are irrigation channels that snake down the island to bring water to the lower levels.  Farmers pay per hour for the use of the water rather than by volume. It was a joy to walk in the sun and listen to the sound of the odd cock crowing or goat bleating (very few goats or cattle are allowed on Madeira because of the soil erosion risk) and see elderly Madeirans at work in the sun.  Looking down in the valleys we could see the old farmhouses, distinctive in that Madeiran farmers in the past lived on the first floor and their animals on the ground floor.

Another highlight was being able to walk in unannounced to a sugar cane factory and listen to the clatter of canes being loaded into a hopper then squashed to release the sugar juice that was collected in a vat.

We were even allowed to climb the wooden ladder to the loft where the sugar content for rum-making purposes was being tested.

On Friday morning, though, it was time to head home, me still pinching myself – and savouring many, many Madeiran moments.