I heard an interesting story about how a couple met over the weekend. These ‘how it happened’ stories are always enjoyable. I was talking to my godmother who is 94 about a neighbour of ours around the same age and how that woman – S – had met her husband who was from UK. I had wondered how they’d crossed paths given that people didn’t travel much in those days. It was all because of red flannel, she said.  I know – intriguing!

There was a shortage of it after the Second World War in England apparently but ‘it could be got’, my godmother said, here in Ireland.  It was in demand particularly for people with arthritis, she said, providing warmth for dodgy knees and lower backs. Anyway, our neighbour, then in her 20s, and from County Wicklow, was a nanny across the water and had been home visiting her family where she heard that a farming neighbour’s sister in the UK was bad with arthritis and needed some red flannel in the worst way.

Given that she was travelling back near there she was asked to deliver some to the woman in the UK. This she duly did and in the process met the woman’s son and the rest, as they say, is history.

I haven’t written a poem about this – yet – but if you want to read one about how my parents met (and how my Dad was keeping an eye on more than the threshing mill that he was in charge of when he visited my mother’s home farm) you can find that poem called Jack and Jane in my new ebook Freewheeling Up The Hill available on Amazon now.

There’s funny stuff and serious stuff in it. Hope you find something you like.

p.s.  wonder why it had to be red flannel? Would no other colour do?  Something to find out! 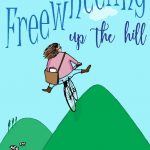