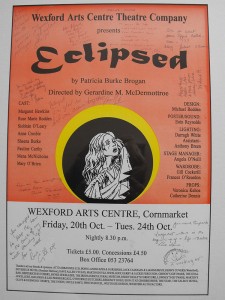 I was a Magdalene woman for seven weeks – six in rehearsal and one in performance. I played the part of Nelly Nora in Eclipsed, a play by former nun Patricia Burke Brogan and staged in Wexford Arts Centre in October 1997.

Getting ready to play the part of a woman put in a Magdalene home because she was pregnant outside marriage I often visited my aunt, my Dad’s only sister, in Dublin. She was 79 at the time.

As we sat around the fire in that Georgian flat I’d tell her what I was doing and about the character of Nelly Nora and about how I’d be wearing a blue dress and a white apron over it on the stage and that I’d have to take my wedding ring off and find a pair of battered black boots in a charity shop to look the part. I’d talk, too, about society and how hard it must have been for girls who became pregnant outside marriage in those times.

‘Mmm,’ she’d say as I rattled on about the play-acting to come.

‘Time to get to bed if we’re to be up in the morning bright and early,’ she’d say eventually, rising to riddle the fire and fill the kettle.

It was only in 2004, three weeks before she died, that I realised why she didn’t engage in that ‘Nelly-Nora’ conversation.

It was because she was a woman who knew how hard life was if you became pregnant outside marriage.

She’d given birth to a daughter, not in a Magdalene home, but in a Protestant version of it – Bethany Home in Rathgar – in 1947.

Her daughter, the cousin we should have known and loved all our lives, turned up at the hospital where my aunt was dying. We’d never known she existed.

In conversations now, I listen for silence and lack of engagement and if they occur I wonder privately, each time, what it is they signal.