HOW TO SPOT A FARMER….

Here’s my quick guide (based on years of fond observation):

DAIRY FARMER – ALL IS BLACK AND WHITE

To him or her, everything is black and white and usually has a tail swinging from one end. He is an early riser but may be found, head down, catching forty winks on the tractor steering wheel during the day in order to recharge flagging batteries.

During the calving season he will look unkempt and be tetchy from exhaustion. At these times he should be given a wide berth or extra TLC (personal judgment should be used around this).

When it comes to food he is a grazer, eating little and often to re-fuel in order to keep ahead of all the jobs he has to do.

Dairy products are very important for him when it comes to food and he is anything but amused when celebrities start rubbishing milk and cheese in the diet – even if said celebrities are good looking.

When faced with a dilemma he will often chew the cud on it before fully digesting the issue and coming up with the best solution for his situation. This form of deliberation is his very valuable farm management tool.

Machinery on the dairy farm will be merely functional and usually muck-spattered as more attention is given to four-legged rather than four-wheeled entities.

His most commonly used after shave lotion is Eau de Silage but he more commonly whiffs of Eau de Cow Manure by Agri.

His favourite song is Mungo Jerry’s Pushbike Song because the backing track reminds him of a milking machine.

His favourite film is When The Cows Come Home (made by the US Dairy Association in 1935), because it speaks of a land flowing with milk and money – a situation he is still looking for. 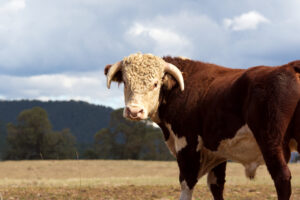 For the beef and suckler person everything is not black and white – instead it’s brown or beige or tan or Belgian blue and a lot heavier around the rear end.  This farmer may even utter the word ‘conformation’ regularly in his sleep as this particular attribute plays on his mind so much.

The beef farmer is not quite such an early riser as the dairy farmer but he may stay up later at night running cattle through the weighing pen in order to check how many pounds they’ve gained in that particular day as weight gain is crucial.

During the calving season he is likely to be disagreeable, too, but this too will pass.

In the kitchen he is a self-feeder when required and an expert at ageing a good steak. He has a tendency, however, when out socially, to chew the fat, metaphorically speaking, and to refer to round tables in hotels and restaurants as ‘round feeders’. He also talks ‘bull’ quite frequently but it is all about improving the herd.

His farm machinery is adequate and possibly a bit cleaner than that of his dairying friend and his favourite after shave is Eau De Bull Manure – again by Agri.

His favourite film is The Rare Breed starring James Stewart and a Hereford bull and his favourite song (yodel) is Cattle Call by Slim Whitman.

SHEEP – NOTHING WOOLLY THERE 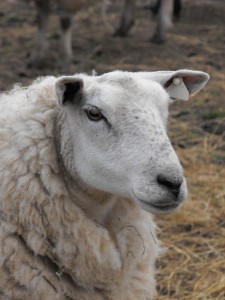 The sheep man is a farmer of a different colour.  While his thinking may be woolly on cattle and tillage fronts it is always clear in relation to the principal interest of his life – sheep.

His world is predominantly white and has very short legs.  He goes to bed at a regular hour but doesn’t count sheep going out through a gap when trying to nod off as he does enough of that during the day and it’s anything but relaxing, especially as there is always one mad ***** that will break rank and bolt and whoever suggested counting sheep as a ‘sleep-time’ remedy in the first place hadn’t a clue, he believes.

Lambing time sees him run off his feet and almost residing in the sheep shed.  It’s also a time when, if anyone looks crooked at him, they could be in danger of being fleeced.

He enjoys his meals and has an occasional preference for mashed turnip but also enjoys greens for good health. Mint sauce is a favourite accompaniment and while consuming this, he dreams of the mint he is going to make some day when factories start paying proper prices.

The only machinery he knows much about is a transport box and a car trailer and his favourite after-shave is Eau De Ewe by Yves Saint Woolly Jumper.

His favourite film is Babe and if taking a break during a wet day can be found ‘stuck into’ sheep dog trials on Sky’s Horse and Country. 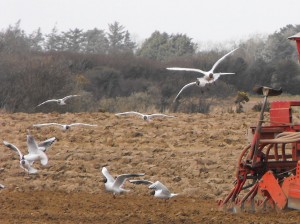 The tillage farmer is very down to earth and to him (or her) everything is brightly-coloured – red, green or blue – and has an engine under its bonnet. Horsepower is the name of the game although horses are not actually involved.

Sleep for him is only sporadic, particularly from mid-July to mid-October, when he works day and night to get corn out and corn in once again. Spring-time is also a period when he runs on adrenalin and ham sandwiches.

He has been known to drive over his spouse in the bed, virtually speaking, as he tills tomorrow’s ground in his sleep, such is his excitement about getting on with his work.

During non-sleep periods he may look dishevelled, just like the other types of farmer at critical times, and the same strategy should apply.

The tillage farmer is fond of his food but is trying to limit it because his doctor is reminding him that he’s not getting enough exercise these days, due to sitting in a tractor all day.

His machinery always looks well and talking about tractors is his main hobby when the day’s and season’s work is done. His favourite after-shave is Eau De Diesel by I.M. Tractor.

His nightmare film would be Grapes of Wrath starring Henry Fonda because it’s about dust bowls and his very favourite song (as with his dairy, beef and sheep farming colleagues) is Charlie Pride’s Just For The Love Of It.

Check it out on YouTube if you want to understand…