Everything in its own time

Everything in its own time

I wish everyone a 2022 with more freedom – freedom from worry about Covid and freedom to go out and about like we used to.

‘It takes the good out of going anywhere’ – that’s what I said this morning after checking news apps that said case numbers would be colossal next week and that two masks were advised rather than one now with the more surgical ones (the white pointy ones) preferred so I’ve ordered a few of those locally online! Not that I’m planning on going too far at the moment, despite having had a booster jab in Christmas week. When will it stop? The sooner the better, amen.

One of the things, writing-wise, that I really miss since the pandemic started, particularly on Wednesday afternoons when the back of the week’s work is broken, and on Saturday mornings when I can ‘freewheel’ (the phone doesn’t ring), is taking my notebook to a chosen café and, armed with coffee, indulging in the progression of whatever creative project I’m working on at the time.

I say indulging because it so pleasurable to write fiction after a week of hard fact journalism.

Occasionally I have company. 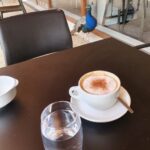 Any recent forays to enjoy coffee out may have involved a few minutes with a notebook, jotting down plans for the week or errant thoughts that sprang to mind but there was no real relaxation in it because I couldn’t linger for long.

During lockdown, though, my saviour has been a 5 km drive to my nearest village which is by a lake (which is actually a lagoon) and dashboard drinking of refreshment bought from the nearby Londis supermarket before parking where I can view bird activity on the small island in front of me.

2021 has been a year of finishing some work and not quite finishing more.

I didn’t get the series of Freewheeling poetry and music events done due to the Covid situation but I will, as soon as it’s possible.  We were just about to have a refreshment rehearsal with a late October booking plan when restrictions kicked in again.

But onto joyful things… December 30th was a landmark day. That was because I completed the seventh draft of my new novel. Whether it will ever be published I don’t know but I’ve done as good a job as I can on it and after that, we’ll see.  I went the way of editorial advice over the last few months, with my fifth and sixth drafts, asking two people whose opinions I value to read it – beta readers, they’re called.  One is involved in farming, is an astute reader and would give me honest answers, I knew, and she did, and the other is a professional writer and critic who has much experience doing this kind of work. It’s a novel set in my home area of south County Wicklow.

It is landscape that I miss and that I have to visit every so often for a ‘fix’ now that I live permanently in a coastal area. I wanted to record its landscape and life in what way I could, wrapped around a fictional story. 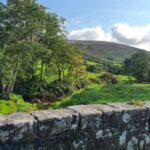 We’ll see what happens – maybe nothing – the publishing world is a tough one – what’s new? – but as I said, I’ve written it anyway and writing it, chipping away at it in spare time over several years, has given me joy.

Getting things finished is important. Getting older, and experiencing drama like pandemics, makes one think of time running out. I have a sticker under my PC now that says ‘Just write. We never know how much time we have.’ And I will because I don’t (know).  I have at least one other book that I want to write (and lots more, I hope!).  Restless Spirit:The Story of Rose Quinn was about giving a voice to those incarcerated in asylums in the past, Deny Me Not was about giving a voice to those reared in children’s homes who never knew their parents. This novel is my home ground one that records my love of its landscape and I’ve another important one that will be non-fiction and memoir, all going well, that will record an historical aspect of family that warrants putting pen to paper.

2021 has also been a year of writing a screenplay for the first time too. I was lucky enough to get a place on the Screen Wexford Scripting for Broadcast course that started in March and over eight months 12 of us produced 1 hour screenplays (to third draft stage).

The tutors’ aim is that an anthology series of 4-6 of these television plays be produced, screenplays that are set in Wexford, are of Wexford by Wexford writers. It’s an exciting plan. I’ve no idea whether mine will make the grade or not (New Year will bring the verdict) but it’s been an exciting time, learning how to write for a visual medium. Writing novels one has the convenience of being able to say what’s going on in a person’s head at any particular time but writing for the screen is another story. It’s all action, telling story through showing behaviour, letting the story out through expression rather than through too much dialogue.  Exposition bad, letting the actors act, good!  It’s just a different way of presenting the story. I find that I am watching television much more actively now and learning the language of the new medium, of course – loglines, treatments, beat sheets, match cuts… There is a lot to get to know but it’s an enjoyable process and I hope to do more of it in 2022.

There’s one creative thing that I made in the past two years that isn’t quite finished yet, though. It’s the rainbow blanket that I knit during the first lockdown. 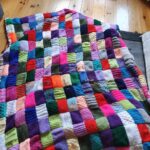 It is for my granddaughter Millie, born in February 2020 before the pandemic hit. I wrote a poem about it too never thinking that the pandemic would linger so long.  That’s the reason I haven’t quite finished the blanket. All I have left to do is embroider some text on the edging. It was supposed to say ‘2020 – the year we needed rainbows’ (see the poem below) but I can’t seem to bring myself to embroider it yet until Covid is a memory.  Will I be putting 2020-2022 – the years we needed rainbows? It’s hard to tell but the pandemic will be over some day and the blanket will be finished. Getting things finished is important, no matter what the task or life’s ongoing challenges but everything has its own time, I find. The drive comes to do it when the time is right.

I felt the pull of wool

the clack of needles

wanting it and them

to ease the pain

the strain of isolation

in the year that she was born

sew them up neatly

stitch them into sense

banish the fear that

with ‘knit one, purl one’ rhythm

create a blanket that would give

the two fingers to crisis

that she will wrap around her

in time to come

And somewhere in the softness

of its cotton back or bound edge