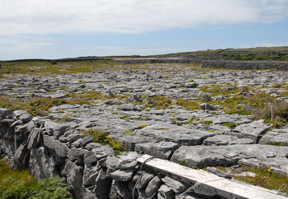 No, I didn’t like the Gaeltacht.  That’s what I told the oral Irish examiner, wondering, at the same time if I hadn’t, in one fell sentence, ruined my chances of a good mark in the Leaving Cert forever.

The words dropped from the examiner’s lips as I knew they would, but deciding that there was no way back now, I told him honestly that all I’d seen there were stones – walls and fields and ditches full of them.

It was the dozens of new bungalows situated in the middle of those tiny, rocky fields, though, that hadn’t made sense to me.

They looked out of place, inappropriate.

Where I came from in County Wicklow, new bungalows were then few and far between and usually built on better, rock-free land.

“It doesn’t make sense,” I said, digging more of a hole for myself.  “you can’t make a living out of land like that.”

When it came to people making a living in their own area, my teenage eyes somehow hadn’t seen past the stones to the thriving fishing port of Ros a’Mhíl, nor to the many small industries that had sprouted up along the roadside between Spiddal and Inveran.

I hadn’t taken account, either, of the crop of tourists that stopped at the shop opposite Coláiste Lurgan in that hot summer of 1976 and asked in funny accents if they were on the right road for Connemara.

For years after I couldn’t understand my dislike of the place until, visiting it long time later, I decided that the secret was probably in the stones.

Stones were for blasting sky-high so that the cow could give way to the plough, like had happened on our farm near Tinahely.

It was Lar Clare who did the job.  Lar was a bachelor in his fifties and he drove his red Ford 500 van the length and breadth of counties Wicklow and Carlow “blowing the stones”.

In the summer of 1964 he arrived in our townland of Rosnastraw, a couple of miles off the main Aughrim to Carnew road where some of the fields were “alive with them.”

You’d have said it too.  If you’d stood on the Winny Hill gate you’d have seen the big blue rocks peeping up, tip of the iceberg fashion in the Stony Field, the Little Field and what was then known as the Far Bog.

We children watched as Lar and his young assistant, Pat, removed the equipment from the van.

Jackhammer, compressor, hand tools, fuse wire and finally the sticks of gelignite that looked for all the world like outsized “peggy’s leg”.

Watching them from the yard, our teeth later rattled as the jackhammer burrowed into the stones.

Eventually we saw Lar hurry back toward the upturned horse’s cart at the far side of the field, leaving Pat to light the last of the fuses.

The first one, of course, much longer than the last so that he had time to get away before the charges were detonated.

“Run!” Lar shouted, and then we saw Pat exit the field as if the devil was after him.

The first of the blasts shook the ground underneath us.  From the haggard came the sudden scrawk of hens and, several fields away, the rapid roar of cattle taken by surprise.

When we were allowed to climb the gate again, a different landscape lay before us.

Great brown craters had appeared in the Stony Field and bits of rock were scattered all over the place.

Bits that would keep many hands busy for many months to come, not to mention the horse and drag that would shift the bigger stones to stand sentry in the ditches.

Stone blasting was a common occurrence in the locality over the next few years, but eventually Lar Clare went into well-earned retirement as reclamation grants came to an end and the outbreak of the Troubles in the North called a halt to anyone being allowed to carry explosives along country roads.

The negative associations of the stones were probably forgotten until I visited the Gaeltacht, a place that remained happily alive with them.

Did I get a good mark in the exam?  Well, better than I’d expected, but sometimes I can’t help wondering if that examiner hadn’t come from a farm himself.  If he hadn’t, at one time, witnessed the blasting of stones to make way for progress.

Or listened to a collective sigh from his parents, who hoped that from now on farming might be easier.