A conversation with Margaret Hawkins 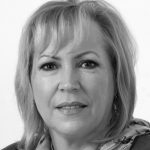 Looking back was there something in particular that helped you to decide to become a writer? Did you choose it or did writing choose you?

I was conscious of a fascination with books from an early age – I loved the look of them, the smell of them, the shape of them so that probably had some bearing.  Seemed to follow that I’d want to put words inside covers myself.

What it comes down to is the urge to tell stories really.  Life has no neat endings.  Writing was a way of putting structure on it, of grasping a tiny bit of meaning out of a lot of confusion, of making some experience/flight of the imagination permanent by committing it to paper.

English teachers were encouraging all the way along.  I remember being the only one in sixth class in a tiny rural school near Tinahely in 1971 and my teacher, Mrs Griffin, giving me the six parts of Sean O’Casey’s autobiography one after another.   I still remember the urgency to finish each one – and not concentrating on maths when I probably should have been.

When did you ‘know’ you were a writer?
When Mericer Press said ‘yes’ to publishing my first book Restless Spirit   in 2006.  I’d been a journalist for years and have written stories and plays but somehow the book is the big thing.  It’s reaching another level – completing the bigger project.  I never called myself a writer up to August 18th 2005 (the day it was accepted) – at least not out loud.

Were you a good writer as a child? Teenager?
I scribbled a lot and had small things published – a poem at 11 was the earliest.  Writing exercises in school were no trouble – ask me to describe a man lighting his pipe or a day in the life of a slipper and I was happy.  Writing letters was always a joy too.

Going to UCD to study English at 17 inhibited me though – at least initially.  There I was reading Shakespeare and Hardy and Austen and Joyce and all the time I was saying to myself  “who the hell do I think I am wanting to be a writer?”  How could I compete with the likes of them?

In the long term I know college was good for me – analysing the work of others ultimately feeds into the mixing bowl in your own head.  The technical ingredients are there when the time comes when you can’t put off putting pen to paper.  You won’t write like anyone else and you never know if you’ll be as good as anyone else and you’ll always be trying to improve but you’ll have made a start. Writers are usually insatiable readers from an early age.

What inspires you?
People – they are faces with stories attached.  There is no such thing as an ordinary person, and everyone’s life tale is fascinating.  Snippets of conversation, expressions, body language, triumph over odds, tortoises and hares, truth, lies – they all inspire me to peel back the layers and have a closer look at the guts of the story.  Every writer has a method that works for them.

On a typical writing day, how would you spend your time?
Typical writing days fall into three categories  – brainstorming/research/outlining days, first draft “face the blank page” days and editing days.  Once you have a first draft you’ve a skeleton to put flesh on.  To me, the first draft days are “real writing”- head simply directing the hand.

I like to have peace and no interruption when I’m brainstorming or doing first draft work.  That’s so that the flow isn’t broken and so that the prolonged concentration will bring me down to a deeper level of the story.

Facing the blank page is difficult sometimes but exciting too.  There comes a time when you have to shut the notebooks and get on with it.  I suppose it’s related to fear – if you don’t start you can’t fail but you have to drive yourself past that and get on with it.  An hour down the line you won’t notice the time passing.  When I was writing Restless Spirit, for example,  it was summer time but a lot of the story was set in winter and the workhouse and asylum.  I’d look up eventually and be shocked to see the sun streaming through the window.  Memorable days.

How long does it take for you to complete a book you would allow someone to read?
I wouldn’t show anyone anything less than a third draft.  The first and second are raw and have all sorts of notes in the margins but by the third meat has appeared on the bones.  That said though, I’d rather the work would be as good as I can make it before anyone lays eyes on it.

I feel better that I have the complete bones of the story rather than just a perfect beginning.  If I think of something as I go I make a note of it but don’t go back and try to add it in then.   I thinks it’s better to get on with the scaffolding.

When you have your idea and sit down to write is any thought given to the genre and type of readers you’ll have?
The story always comes first.  I feel that if I do a good enough job writing it people will want to read it, no matter what genre it’s in and who’s to say there shouldn’t be new genres every so often?  I’ve categorised the novel I’ve just finished – Deny Me Not – as agri-lit because it is rural-based commercial fiction.  Have I created a new genre, I wonder?

Writers often go on about writer’s block. Do you ever suffer from it and what measures do you take to get past it?
Luckily I haven’t experienced it yet. Deadlines usually concentrate the mind wonderfully – maybe that’s the journalistic training kicking in.

With fiction – spare time work – you have to set your own deadlines in order to finish a novel or play or even a short story. Knowing you’ve finished a big project before gives you huge confidence too – writing Deny Me Not I kept telling myself  “I’ve written a book before, I can do it again, all I have to do is keep going, page by page.”

That said, I did experience a circumstantial blockage related to Restless Spirit.  I had shelved the story because there was an aspect of it that I couldn’t disclose initially – the psychic side related to Catherine, Rose’s great grand-niece.  I tried to write round this aspect and finish the book but I wasn’t happy with it so I eventually gave up on the idea of ever finishing it.  After that no story or play I wrote seemed to work. I suddenly felt as if I’d lost the recipe.  It was like the unfinished business of the book was stopping my head from going anywhere else until I’d completed it.  In 2004 I got the green light from Catherine to tell the whole story and that was it – the energy to complete it suddenly arrived and since then words have continued to flow.

When someone reads one of your books for the first time, what do you hope they gain, feel or experience?
I’d hope they’d sit up all night reading it – that’s the acid test for any book, I think – absorption and wanting to turn the page.

Can you share something you’ve learned about the business of writing since your first publication?
Discipline is probably the most important thing – the stick-at-it-ness that makes you finish a project.  You can be an aspiring writer all your life but unless you apply bum to seat you’ll never have a completed script to show anyone.

What’s Restless Spirit about? Where did you get the idea and how did you let the idea evolve?
Restless Spirit is about a woman named Rose who wanted recognition from family and her story told after being a skeleton in the family cupboard for almost a century. I got the idea from a letter to a local newspaper that I followed up.  It led me down an extraordinary path.

What kind of books do you like to read?
I”m a big fan of Colm Tóibín, Julian Barnes (Sense of an Ending is on my treasure shelf), Margaret Atwood and Sebastian Barry, as well as early Maeve Binchy.   I recently came across an excellent book called Colour  by Rose Tremain that hooked me from page one and I loved Christine Dwyer Hickey’s Cold Eye of Heaven.  If you liked Sebastian Barry’s The Secret Scripture, you’ll like Restless Spirit:  The Story of Rose Quinn – a real life story of a woman being committed to an asylum.  Set in Wexford.

When you’re not writing what do you do for fun?
Go places, feel things, see things, watch things – it’s the best fun you can get and it all feeds back into the system whether it’s by deepening knowledge or insight.

New writers are always trying to gleam advice from those with more experience. What suggestions do you have for new writers?
Perseverance pays.  You can be an aspiring writer all your life but if you don’t get on with it you’ll never finish anything.  If you try hard enough for long enough you’ll be published.

If you weren’t a writer what would you be?
Something to do with words, I’ve no doubt – librarian, sign painter, printer.  A couple of years ago I interviewed a neuro-developmental therapist and was so impressed by how it helped children with reading/learning problems that I considered re-training.  But again it’s back to words.  A child not knowing the joy of reading is something that would upset me. It’s a loss for life.